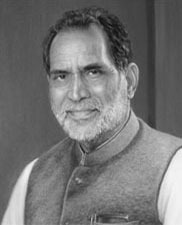 Shri Chandra Shekhar was born on July 1, 1927, in village Ibrahimpatti, District Ballia, Uttar Pradesh, into a farmer family. He was the President of the Janata Party from 1977 to 1988. Shri Chandra Shekhar was attracted to politics from his student days and was known as a fire-brand idealist along with revolutionary wrestler. After a master's degree (1950–51) in political science from the University of Allahabad, he joined the socialist movement. He had the privilege of being very closely associated with Acharya Narendra Dev. He was elected Secretary of District Praja Socialist Party, Ballia. State Praja Socialist Party. In 1955–56, he took charge of the state general secretary of UP, the Rajya Praja Socialist Party.

In 1962, he was elected to the Rajya Sabha from Uttar Pradesh. In January 1965, he joined the Indian National Congress. In 1967, he was elected General Secretary of the Congress Parliamentary Party. As a Member of Parliament, he made a mark, taking a keen interest in protecting the interests of Dalits and seeking policies for rapid social change. In this context, when they attacked the increase in the proportion of monopoly houses with state patronage, they came into conflict with centers of power.

He came as 'Young Turk' leader for his conviction, courage, and honesty in the fight against vested interests. In 1969, he founded and edited 'Young Indian', a weekly published from Delhi. It was one of the most cited in its editorials at the time. YOUNG INDIAN had to be shut down during the Emergency (June 1975 to March 1977). It resumed regular publication in February 1989. He was the chairman of its editorial advisory board.

Mr. Chandrasekhar has always stood against the politics of personality and favored the politics of ideology and social change. This motivated him more towards Sri Jayaprakash Narayan and his idealistic view of life during the turbulent days of 1973–75. He soon became the focal point of discontent within the Congress party.

When a state of emergency was declared on 25 June 1975, he was arrested under the maintenance of the Internal Security Act, although he was a member of the Central Election Committee and the Working Committee, the apex body of the Indian National Congress. Mr. Chandra Shekhar was one of the few persons in the then ruling party who was imprisoned during the Emergency. He always rejected the politics of power and opted for a politics of democratic values ​​and commitment to social change.

His diary written in Hindi during imprisonment during the Emergency was later published under the title 'Merry Jail Diary'. Shri Chandra Shekhar undertook a marathon voyage (padayatra) across the country, covering a distance of approximately 4260 km from 6 January 1983 to 25 June 1983 from Kanyakumari, Rajghat (Samadhi of Mahatma Gandhi) in the deep south in New Delhi. The rapport with the public was initiated to renew and understand their pressing problems.

He has set up around fifteen Bharat Yatra centers in different parts of the country including Kerala, Tamil Nadu, Karnataka, Maharashtra, Madhya Pradesh, Gujarat, Uttar Pradesh, and Haryana, in order to enable social and political activists to do extensive education and grassroots work. To be kept in the back pocket. Country. 19.7 to 19. He has been a Member of Parliament since 1972, except for a short term till 9. He successfully contested from his home constituency Ballia and Maharajganj constituency in Bihar in 19 successfully. He evacuated the latter.

Chandra Shekhar passed away on 8 July 2007, a week after his 80th birthday.