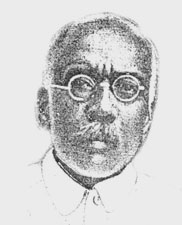 Ganesh Prasad (15 November 1876 - 9 March 1935) was an Indian mathematician who specialized in the theory of potentials, the theory of functions of a real variable, the Fourier series, and the theory of surfaces. He was trained at the Universities of Cambridge and Göttingen and on his return to India, he helped develop the culture of mathematical research in India. India's mathematical community considers Ganesh Prasad the father of mathematical research in India. He was also a teacher who took a special interest in the advancement of primary education in rural areas of India.

Ganesh Prasad was born on 15 November 1876 in Ballia, Uttar Pradesh. He earned his B.A. Degree from Muir Central College, Allahabad, M.A degree from Universities in Allahabad and Calcutta, and D.Sc. Degree from the University of Allahabad. After teaching at Kayastha Pathshala, Allahabad, and Muir Central College for nearly two years, he moved to Cambridge for higher studies and research. While living in Cambridge he e. W. Became familiar with mathematicians such as Hobson and Andrew Forsyth. He remained seated even when Adams failed for the prize competition. He later moved to Gottingen where he was joined by Arnold Sommerfeld, David Hilbert, and George Canter. In Gottingen, Prasad presented his paper, in terms of title and on the analytical principles of heat, to Felix Klein for the Adams Prize competition, which greatly appreciated it and published it in Gottingen Abendlingen. Ganesh Prasad spent almost five years in Europe.

Prasad returned to India from Europe in 1904 and was appointed Professor of Mathematics at Muir Central College, Allahabad. Within a year of his appointment to Allahabad, Prasad was sent to Maharani College, Banaras, and remained there until 1914 when he was invited to head the Mathematics Department of the University of Calcutta. Ganesh Prasad was the President of Applied Mathematics, Ras Bihari Ghosh of the University of Calcutta from 1914 to 1917 (he was the first to occupy this chair [2]) and was Professor of Mathematics at the same university from 1923 to 9 March 1935 at his death. Between these two assignments, he served as Professor of Mathematics (1917–1923) at Banaras Hindu University. While living in Benares, he helped found the Banaras Mathematical Society. Ganesh Prasad was elected the President of the Calcutta Mathematical Society in 1924 and the Vice President of the Indian Association for the Advancement of Science, Calcutta, and remained in the same position till his death. He was a founding member of the National Institute of Science of India, which has now been re-designed as the Indian National Science Academy. Ganesh Prasad wrote 11 books, including a treatise on spherical harmonics and more than fifty research papers in Bessel and lame functions and mathematics.