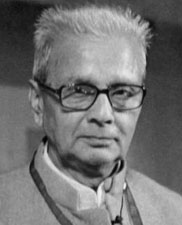 Kedarnath Singh is one of the most prominent modern poets of Hindi. He is also a noted critic and essayist.

He was born on 7 July 1934 in Chakia village of Ballia district in eastern Uttar Pradesh. He completed his graduation from Pratap College Varanasi. He passed his M.A from Kashi Hindu University and did his Ph.D. from the same university.

In Gorakhpur, he spent some time as a Hindi teacher and went to Jawaharlal Nehru University, where he served as a professor and head of the Hindi department. He was awarded the Jnanpith Award (2013), Sahitya Akademi Award (1989) in Hindi for his poetry collection Akal in Saras.