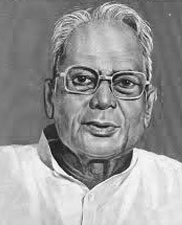 Jay Prakash Narayan (1902–1979) was born in Sitabadiyara, a village in Ballia, Uttar Pradesh, where Ganga and Sarayu meet. He did his high school from Sitabadiyara and was then sent to his college in Patna and married to Patna with Gandhi's blessing, but his wife was sent to the Sabarmati Ashram. While JP did his studies and moved to the USA for further studies where he did odd jobs to pay for his education. He returned to India in 1929 and joined the Congress Party.

In 1932, he was sentenced to one-year imprisonment for participating in the Civil Disobedience Movement against British rule in India, after which he formed the Congress Socialist Party, a leftist party within the Indian National Congress. JP was jailed again by the British in 1939 for opposing Indian involvement in World War II on behalf of Britain, but survived and briefly organized violent resistance to the government before his return in 1943 Tried. After his release. 1946 He tried to persuade Congress leaders to adopt a more militant policy against British rule.

In 1948, he, along with most of the Congress Socialists, left the Congress Party and formed the Praja Socialist Party in 1952. Soon he got fed up with the political atmosphere announced in 1954 and said that he would now dedicate his life exclusively for devotional sacrifice. The movement founded by Vinoba Bhave. In 1959 he formulated a new agenda for "Reconstruction of Indian Politics" through a four-tier hierarchy of village, district, state, and union councils. Narayan returned to politics in 1974 when he saw corruption in India and the growing undemocratic government of Prime Minister Indira Gandhi. He gained a following from students and opposition politicians and the public. Narayan was one of those who wanted Mrs. Gandhi to resign and was therefore jailed in an emergency. His health deteriorated in jail. He was released after five months but never recovered from his health. When Gandhi and his party were defeated in the elections in 1977, Narayan became the advisor to the Janata Party in the choice of leaders to lead the new administration. He too died a broken man who was dreaming of building India where everyone had true freedom.